Still Recording, but I'm on the Home Stretch (honest!) 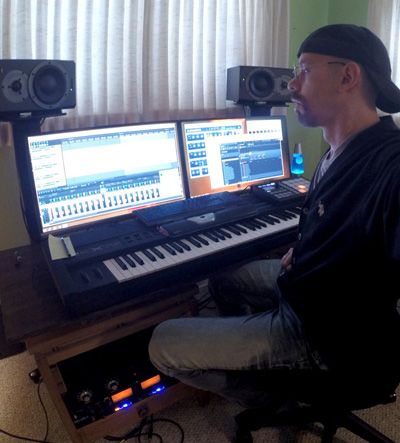 Yep, that's me still recording in the pic. When that was taken last week, I was mixing another new song called "The Devil's Camera," a small snippet of which is now in the site's audio player. I was supposed to be all done recording songs for this album by now, but I'm still at it. Basically, what happened is that I missed my window to get the album done and released before the holidays hit last year. So, as I tend to do, I got restless...and started writing and recording another song. And then another one.

I know, I know...if I don't cut myself off, I'll never get a new album out, eh? Don't worry, even I'm about to lose patience with myself! I'm going to let myself keep chasing the muse long enough to get one more additional song (maybe two, MAX) put together and that's it. At that point, what I have is what I have, and in the spring, it's time to stop teasing and put out (d'oh!).

Of course, somewhere in the midst of that, I also have a half-done video that I need to finish shooting and try to edit into something coherent. And album graphics to design. (I'm surprised I can even keep my head upright with all the different hats I'm wearing!)

That's the news, and the weather is...snowy. I'm glad I don't have to go anywhere today. Guess I'll put on a fresh pot of coffee and go bang on the pie-anner and plunk on that bass gee-tar...