"Sunshine in the Shade" 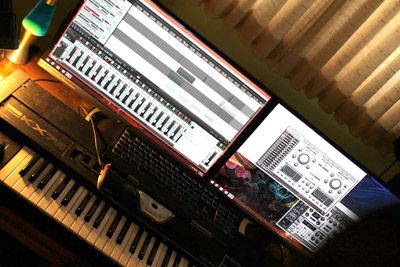 Here we are into another new year, and I'm still recording away. I know, I was saying two years ago that I was wrapping things up (so I thought!). The last couple of years have been quite a shakeup in terms of musical direction and focus. I drifted away from the piano-based music I had been doing for a while back towards electronica. And then, for a few months, I found myself fired up about recording conceptual rock music again. I don't consider the latter to have been a wasted errand, though - some good things came from it and that music will still likely come out at some point in the form of a separate EP. In the present, though, I've locked back into more electronic music. Well, my own brand of it, at any rate, which is definitely not fashionable club music. I guess even when I do electronic music, you can tell I have roots in progressive/conceptual rock. I wonder what you'd even call my variant - conceptual electronica?

I transitioned back last month when I decided to spend a couple of days reworking/remixing an electronic piece I'd recorded a year ago. It really got me eager to delve deeper back into synths again. Scott and I had just binge watched an FX series called Legion (basically an X-Men spin-off - I'm a real sucker for anything X-Men). I was intrigued by the idea of the main character being essentially "possessed" and manipulated by a foreign entity he didn't even realize was there. And of course, "Lenny" cut such a memorable figure as the more palatable projected face of the actual enemy. So I decided to write a song about her/him/it. My lyrical ideas often come from weird places and this is definitely one of the weirdest. So a few weeks later, we have "The King of Shade," which is equal parts sinister and sort of twistedly happy, rather like Lenny herself. A preview of the first half of the song is now loaded in the LISTEN widget thingie - hope you enjoy!

I have 8 or 9 songs ready to go that fit into the context of a more electronic-oriented album, so I'm pretty far along down that road. A release by late summer this year isn't at all unrealistic now, barring unforeseen complications. 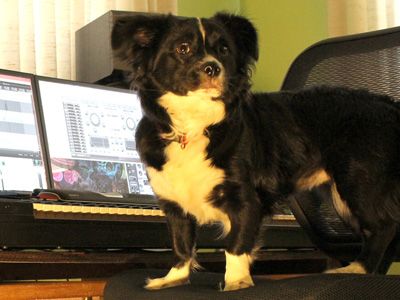 Oh, speaking of Shadow Kings (or in this case, Shadow Queens), there's my mascot and newest addition to the family hanging in the recording space. Shadow joined the family last June when she was just a 6-week-old little puppy, and now she's all grown up. She's sure livened things up around here. Equal parts holy terror and cuddly angel and clearly thinks she runs the house (which isn't entirely untrue).

Well, that's the news for now. Hope this finds everyone doing well and making good things happen in the new year. Catch up again soon!